I recently attended a Victory Summit presented by the Davis Phinney Foundation for Parkinson's, this one in Denver. The first thing I learned, the first victory, is that this isn't just a symposium it's an Experience. The main reason for my trip down I-70 was to honor a request Davis made of me more than a year ago, to learn firsthand how the Victory Summit helps those afflicted and their families deal with Parkinson's Disease. I figured it was pretty much a guarantee to make me a better advocate, very likely a better wellness professional, and maybe even a better coach. Well, it was so much more and a victory like no other.

Davis Phinney, diagnosed with Parkinson's in 2000, knows how to prove a point when he makes an entrance. It was fun to watch everyone brighten up when he ran through the venue, proving what is possible. 600 victories in one fell swoop. He bounded onto the stage, flashed his bright smile and supercharged the entire room. And you bet he had us throwing our arms up in the air for a big victory salute.

The presentations and panel discussions were top notch and covered a variety of topics on the disease itself and living with the effects. We heard from doctors, therapists, and even a comedian who performed for us and later shared her experience of living with Young-Onset PD during a panel discussion. Maintaining control of movement is a primary focus for those living with Parkinson's, so we were on the move all day long. We played instruments, we exercised, we stretched, and we even danced. Each activity and each session a new victory. Would you expect anything less from one of the winningest American cyclists?

The Victory Summit is very much about families since spouses, children, and relatives become caregivers to those living with PD. This summit had an unexpected and profound impact on my family. The Victory Crew's Program Manager, Lauren Hunt, asked me about the other Poertners who would be attending. I wasn't familiar with these people, but she made sure we connected. I met Terry and his sister, Carol, much to their surprise. We weren't sure how or if we were actually related, but it didn't take long to realize that it didn't matter, we became family that day through the Experience. A major victory for all of us. Terry and his father both have Parkinson's, so he and Carol filled me in on what they deal with day to day. Terry is an athlete, an avid skier determined to continue in his sport, to keep counting victories, to Live Well Today.

The Experience that is the Victory Summit had blown the top off of any expectations I might have had. About 600 people experienced the day, 600 more reasons that Every Victory Counts®. You can help bring more victories to those living with Parkinson's Disease by donating to the Davis Phinney Foundation on my special Donation Page.

If you or someone you know has Parkinson's disease, make it a point to attend a Victory Summit. You'll hear from top medical professionals, get your questions answered, and actively learn skills to Live Well Today. I can't guarantee that you'll meet unknown relatives, but I can guarantee that you'll leave with new skills, more knowledge, and your own unique Experience.

I share the same birthday with one of my favorite cyclists, Davis Phinney. Last year another one of my favorite cyclists, John Howard, got together with Davis and between the two of them, they made sure I received a very special gift - a signed copy of Davis' newly released book, Happiness of Pursuit. If you haven't read this book, make it a priority. The story is a gift in and of itself, and one you shouldn't miss.

The book was only the beginning of what I was about to experience in the way of gifts from those two. About a month later, John and I spent some time with Davis and his wife Connie, and their daughter Kelsey. We were in Colorado for the inaugural USA Pro Cycling Challenge stage race and to attend the reunion of the Red Zinger/Coors Classic races. I was a budding triathlete when the last of those races were going on, fresh out of high school and taking my cycling cues from Connie, Davis, John, and the rest that I had been reading about in magazines. 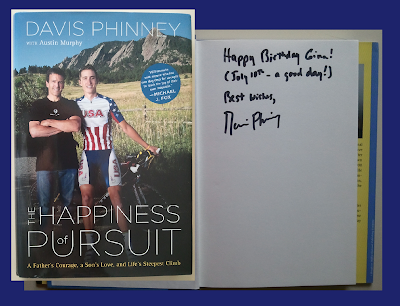 For those afflicted with Parkinson's Disease, writing can be a difficult and tedious task.

Celebrate Every Gift
As a health and wellness professional, I am frequently asked to teach a variety of topics, usually about using nutrition and exercise to prevent or improve certain health conditions. Parkinson's Disease is one of those conditions. Physical activity and key nutritional elements can enhance quality of life while living with this disease.

Davis Phinney was diagnosed with Parkinson's in 2000 at the young age of 40. As athletes we value motion, to go out there and do whatever we want to do. We value the effect motion has on our psyche. With Parkinson's Disease, motion becomes difficult. Motion becomes involuntary. Motion becomes rigid. The psyche takes a hard hit and the fight becomes more mental in order to deal with the physical. As with many diseases, we don't know how long we'll wait to find a cure. Davis has taken the bull by the horns and is teaching people with PD to live well right now. No waiting, no jacking around. Live well now.

Last summer in Colorado, Davis discussed the work of his foundation and filled me in on some of their upcoming activities. I also chatted with Kelsey for a bit as she shared her perspective on living with this crazy and frustrating disease. She's a very bright young lady and quite talented as a cross-country skier, which many of you know is one of my favorite winter activities.

Icing on the Cake
Another big treat came during the the Time Trial stage of the USA Pro Cycling Challenge in Vail. I had the honor of being introduced with a group of Red Zinger/Coors Classic greats which included the Phinneys and John Howard. I had no idea they were going to include me until we were on the start ramp, it was quite a surprise. A heartfelt "thank you" goes to Wayne Stetina for his kind words when I said I felt like I was crashing their party. The crowd was huge and welcomed me as warmly as they did the rest of these distinguished individuals, although I seriously doubt that very many knew who I was other than a few of my friends who were there at the race. That night I attended the Red Zinger/Coors Classic 35th anniversary reunion, soaked up the insanely intense energy of the ballroom that held a couple hundred cyclists who were (and are) the best of the best, reconnected with some people, and made new friends. That energy has stayed with me and has made for a really great year.

Returning the Gift
This year I'd like to return the gift to Davis and John, a gift that has gone well beyond the pages of a book.

July 10th is one of our Tuesday Night Worlds crit races. Just another training race, just another Tuesday. But even in training, Every Victory Counts®, so I'm donating that night's entry fees to the Davis Phinney Foundation. This is my way of celebrating the gifts I have and to wish Davis well in his own fight and in his mission to help people living with Parkinson's. Please join me with a gift of your own by donating on my special Fundraising Page.

Bring your party hats to Tuesday Night Worlds on July 10th and show me the biggest turnout of the season.

As a sign of gratitude for how my husband was saved from Parkinson , i decided to reach out to those still suffering from this.
My husband suffered parkinson and it was really tough and heartbreaking for me because he was my all and the symptoms were terrible, we tried various therapies prescribed by our neurologist but none could cure him. I searched for a cure and i saw a testimony of so many people who was cured from parkinson, and so many other with similar body problem, and they left the contact of this doctor who had the herbal cure to parkinson I never imagined parkinson has a cure not until i contacted him and he assured me my husband will be fine. I got the herbal medication he recommended and my husband used it and in one months he was fully okay even up till this moment he is so full of life. parkinson has a cure and it is a herbal cure contact the doctor for more info on drwilliams098675@gmail.com on how to get the medication. Thanks for reading my testimony .

Home
Subscribe to: Posts (Atom)
Welcome to the "clubhouse" of LifeBalanceSports.com! You'll get information, insights, and a bit of fun to help you live better, feel better, and perform better.
Thanks for visiting!